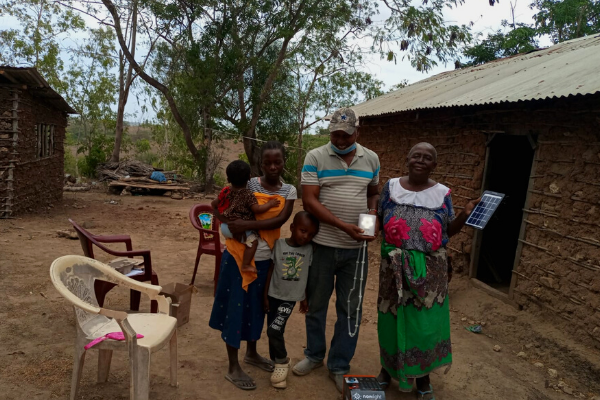 We are very grateful to Deciwatt for partnering with us on the distribution of new NowLights amongst the communities supported by Haller.

The Haller Foundation first partnered with Deciwatt in 2019, on the supply of Gravity Lights to Haller community members. Subsequently, Deciwatt has developed the NowLight, which not only supplies a light source but also charges mobile phones. Pulling the NowLight cord for just a minute generates 15 minutes of talk-time on a mobile phone and up to 2 hours of light.

Deciwatt’s innovation has produced a reliable, independent source of off-grid energy, which doesn’t rely on battery or solar power. Hundreds of millions of people around the world rely on highly polluting, dangerous and expensive kerosene lamps for lighting, and Deciwatt provides a cheap and inexpensive solution to this problem.

The Haller team has carefully selected communities and individuals that Haller works with where the NowLights would be of most value.

In January 2022, Michael Mjomba, Haller Kenya’s community coordinator visited the Sauti ya Kina Mama community to distribute the first NowLight of this campaign.

The NowLight was given to Mrs Kahunda kidzangi Konde, who had carefully maintained her original Gravity Light for more than three and a half years. This reinforces the durability of Deciwatt’s innovations, as well as Mrs Konde’s own commitment to sustainability – ensuring the longest lifetime possible for these life-changing technologies. However, with a growing family and with no other access to electricity, she made for an ideal recipient of a new and improved NowLight.

20 years ago, Mama Patricia volunteered her land to establish a rain-fed dam and well for the wider Misemerini community group to benefit from. Years later, she was featured in our first film on rain-fed dams, and emerged as “Best Farmer of the Year 2016.” She has continued her farming journey with us ever since and as a result, we awarded her with a donated NowLight from this campaign.

NowLights have continued to be distributed over the last few months as part of our community outreach program. A NowLight was given to the school at Nguu Tatu, due to poor lighting which negatively impacted the education of an entire class. This donation underscores the impact that only one NowLight can have, helping to improve education and broaden horizons. The school caretaker Mr Mwatete Nyrio was also given a NowLight for his homestead. Mr Mwatete has reliably served the community’s children in his role at the school, and we wanted to recognise this service.

NowLight’s were also given to Eunice Mwaka Mfupa and Karisa, who have both participated in films made for Haller. Eunice was part of the GODAN (Global Open Data for Agriculture and Nutrition) partnership film at her Kabenderani community, featured as the most successful small scale farmer. Karisa participated in one of the very first films, which covered the Kashani and Kimbunga projects.

Our team in Kenya will continue to distribute NowLights over the coming months. A huge thank you to Deciwatt for their continued support, we look forward to seeing where this partnership takes us.