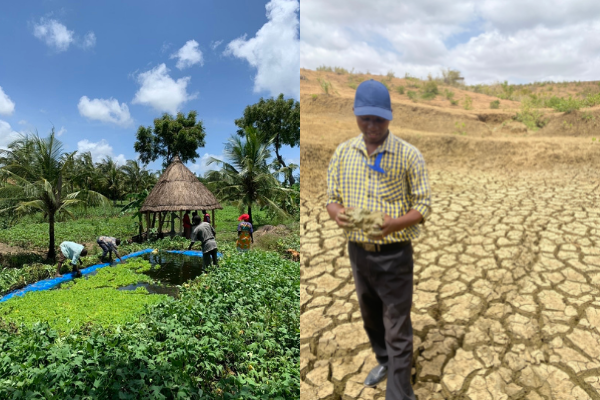 Recent photos from our team in Kenya demonstrate the extent of damage the ongoing drought has caused for the natural landscape. The first photo was taken in February 2022, the second in October 2019, the difference is stark and horrifying.

Three consecutive rain seasons have failed to arrive across Kenya, including the areas around Mombasa where Haller operates. The March-May rainfall distribution in both time and space is expected to be poor. There is a high level of concern around food insecurity, as well as health impacts from lack of access to clean water.

In December, maize prices in Mombasa were already 23% above average due to high demand and declining maize imports from Tanzania. Without an improvement in growing conditions, prices are set to only increase over the coming months. These issues have been exacerbated by the Russian invasion of Ukraine, which has produced a surge in wheat prices.

The connection between climate change and drought is well established. However, the true scale of the impact climate related droughts could have, has only recently been spelled out. In October last year, the UN warned that over 100 million people across Africa were under threat from accelerating climate change. The continent is warming much faster than the rest of the world, and this has already had devastating human consequences. The number of undernourished people in sub-Saharan Africa has increased by 45.6% since 2012 according to the FAO. Currently Madagascar is experiencing the first ever famine acknowledged by the UN to be driven not by conflict but by climate change.

Our team in Kenya is working to combat the immediate impacts of the drought on food security through a porridge program in schools, as children are most at risk of malnutrition. In the longer term, our focus is on helping smallholder farmers establish food security, but also food sovereignty, meaning they can rely on the crops they grow to sustain themselves.

The team’s work is critical, and the situation in Kenya reflects the impacts of climate change in the present moment. Too often, the consequences of climate change are spoken about in the future tense, but for millions of people they are an everyday reality. We need to change the way we speak and act around the climate, and change far off deals into immediate action.