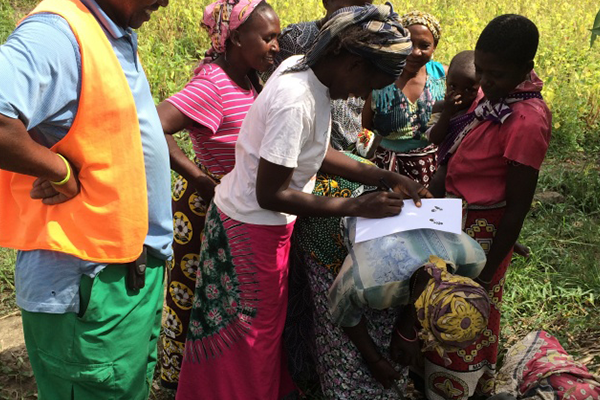 Each week, Michael Mjomba revs up his motorcycle to ride into Kenya’s rural heartlands and deliver agricultural advice to smallholder farmers.

Armed with just a smartphone and a specially designed app, Mjomba, a field officer with the Mombasa branch of the Haller Foundation, offers tips on crops, fertilisers, pests and more to improve the lives and incomes of Kenya’s rural poor.

“I usually go out three times a week, but if there is more demand I will go up to four or five days a week,” he explains. “We teach them at our demonstration farm but that is not enough. I have to be there to train people with my phone.”

Haller’s web-based app takes aim at one of sub-Saharan Africa’s biggest challenges when it comes to creating a profitable agricultural sector: information. Launched in November, it communicates farming advice and techniques to people, regardless of their literacy level. With audio available in English and Swahili, plus simple, image-led instructions, the app is a quick and inexpensive way of delivering lessons to a wide audience.

“It helps us train grassroots farmers on farming techniques – especially organic farming – so they don’t have to come all the way to our demonstration farm in Mombasa,” explains chief operations officer Gideon Amboja.

Although mobile penetration in Kenya is high and climbing – World Bank figures say 82 per cent of Kenyans had a mobile subscription at the end of 2014 – smartphones have yet to replace more basic models. To combat this, field workers like Mjomba travel to different communities to share their knowledge and phones, giving smallholders some educational screen time.

“The biggest handicap is that many of the farmers we are dealing with live below the poverty line and they have not been able to afford smartphones for this kind of training,” says Amboja. “Currently, we give different community-based organisations one phone each and then people crowd around and get information.”

Despite the fact it has been downloaded in 87 countries, it’s still too early to measure the app’s impact, but the techniques it contains have been well received.

Patricia Mwameso, a 50-year-old farmer from Kenya’s Bamburi district supports her family with the crops from her seven-acre farm. Mwameso began training with Haller in 2010, but since the app was launched has had readier access to information.

“I’ve gained more knowledge on how to space crops like tomatoes, maize and vegetables,” she explains through interpreter and Haller app mentor Konde James. “I’ve also learned how to make compost, which has been really beneficial to my crop yields.”

Crucially, Mwameso has also become an advocate for the app’s use among other farmers. “I like teaching others how to use the app and how to apply the organic farming techniques,” she  says.

Her success has earned Mwameso a place among Haller’s hero farmers, those who have done the best job of applying the techniques, adopting the principles and passing on the knowledge. It’s a success the foundation hopes to see continue and be replicated elsewhere.

“We can’t keep expanding physically because we don’t have the resources,” explains Louise Piper, co-founder and trustee of the Haller Foundation. “But one thing we can do is use technology as an aid to development and put all our curated content on to an app available for farmers.”

Built on what’s known in tech circles as open architecture, the app can easily have further content, or languages added, to broaden its appeal for farmers around the developing world.

Piper describes the big picture vision as one of creating a sustainable model for economic development, but in an environmental way. As feedback from users accumulates she hopes to be able to measure the app’s impact and map out future updates.

“We’ve done baseline surveys. but we need another three to six months to see to what degree livelihoods have improved,” she says. “There are plenty of anecdotal stories, but to really look at how that translates into revenue and livelihood improvement takes a little longer.”

Extra features that may make a debut in future iterations include information about weather conditions, access to micro-finance services such as insurance for crop failure, and curated content from other agriculture specialists.

“The app has had a tremendous impact in empowering farmers and leveraging our content better, without them having to come back [to the demonstration farm] and relearn it,” says Piper. “Now our model is to think of it as an Amazon for farmers, so it becomes a one-stop shop for farmers across East Africa, and beyond.”