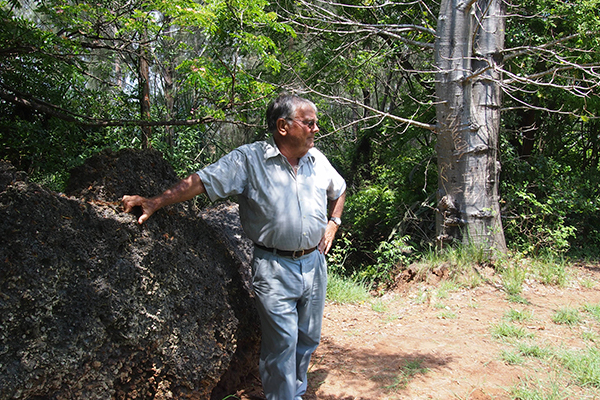 Back in 1959, a cement company with 500 acres to spare (near the port city of Mombasa in Kenya) decided to use its surplus land to grow vegetables for the families of its 500 African workers. Rene Halter — a Swiss agronomist who, at the time, was working on a coffee plantation in neighboring Tanzania — was given a contract to organize the project.

An energetic experimenter, the then 25-year-old Haller not only succeeded in growing vegetables on what had always been considered uncultivable bush land, but managed (through crossbreeding) to develop a strain of chickens that could withstand Mombasa’s arid climate. In addition, Rene brought sheep and goats into the area to clean up acreage not under cultivation, and began stocking the land with wild elands, impalas, and daika. (“The latter three animals are mainly leaf-eaters,” Dr. Haller explains, “and I’d like to introduce hippos and buffalo here to eat the grass. We want to find out how much biomass an area can accommodate.”)

Five years ago, when the cement company became uneasy about the ugly scars their limestone excavations had left on Mombasa’s scenic north coast, Rene was given a further assignment. He was asked to beautify the area in an economically productive way.

Dr. Haller started by planting a variety of drought-resistant trees…trees that now cover a 65-acre area. (The largest of them, already over 60 feet tall, are now being harvested.) Next, he created picturesque fish ponds that have — over time — attracted a wide variety of tropical birds and animals. Rene has since expanded the fish farm by building inexpensive cement-and-asbestos tanks. (“Give me a cubic meter of water,” he boasts, “and I’ll grow a hundred kilos of fish.”)

The spent fish tank water is used for irrigation, and all organic matter is composted. Even filter dust from the cement factory — which is rich in potassium — is used on the farm. “It raised our corn yields by 20 to 24 percent,” Dr. Haller Says.

All of Rene Hailer’s experiments continue to benefit the local farmers, who once had trouble eking out a subsistence living, but who now (thanks to Hailer’s work) sell organically grown eggs, chickens, and vegetables on the Mombasa market.

“There shouldn’t be any food shortages in Africa at all,” the 42-year-old agronomist states. “We’re showing here that it’s possible for Africans to grow all kinds of animal and vegetable protein, using a level of technology they can both afford and put into practice right now.”