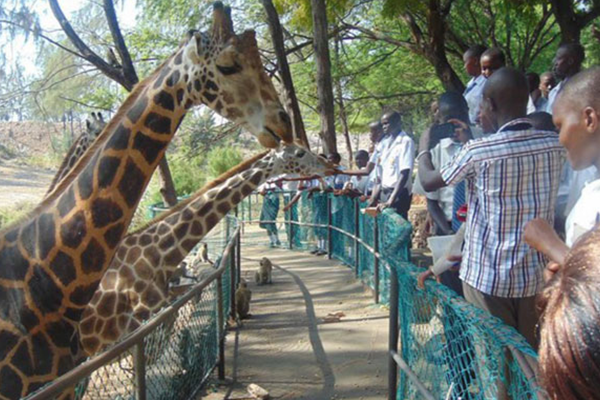 From wasteland to paradise, this is the story of how with time, dedication and local support a sanctuary for orphaned and lost wildlife was recreated from the ravages of an old quarry – the Haller Park, Mombasa.

Originally it was called the Bamburi Nature Trail, but has recently been renamed Haller Park in honour of Dr. Rene Haller in recognition for his work made in conjunction with Bamburi Portland Cement Company for transforming their abandoned quarry into the ecological wilderness it is today.

The Bamburi Portland Cement Company opened a limestone quarry just outside Mombasa in 1954. By 1971, the quarry had left an ugly gaping hole on the scenery of Mombasa, which concerned the management of the company. They decided then to try an experiment to reclaim the land and restore it back into an ecological wilderness. In 1983, the now commercially exhausted quarry, still left a scar on the landscape and the experiment continued.
Findings found that the coastal limestone quarry, formed by ancient corals, is not a good substrate for growing new plants. Another problem encountered, was the water table. Being coastal, the water table is tidal, making the water very brackish. Finding plants that can survive poor soil and salty water was a challenge. Dr Haller, after spending many hours on the dusty floor of the quarry, found only a few ferns growing there. The first task then, was to find pioneer plants that could withstand the limestone desert, brackish water and poor soil. They must also be able to survive the harsh African sun.
Twenty-six varieties of saplings were planted. Only three survived. Between 1971 and 1974, they planted some 12,000 tree saplings. After ten months of steady growth, some of the trees were looking decidedly unhealthy. After studying healthy trees in another environment, Dr. Haller found a solution – soil nitrates and microorganisms were missing from the near sterile soil. He inoculated the soil, fixed the atmospheric nitrogen, and the trees started to look healthier.
They transplanted young tree saplings from government forests into the quarry. To avoid monoculture planting different types of trees were needed but consideration or their best use needed to be take into account too; timber for construction, poles or fence posts and for charcoal production later. Some 25 different kinds of trees, so far, have been planted and tested; eucalyptus, neem, algaroba, pinus, baobab, coconut, date palms, banana and mango trees to name a few.
Dr Rene meticulously observed nature’s reactions and immediately applied appropriate measures that helped the reforestation process. Some of the trees are evergreen and shed their needles. These needles were difficult to break down, by the microorganisms, due to their high tannin content. Which caused the establishment of new growth to be slow too as the humus was not adequate.
A lucky incident solved this problem, when the red-legged Mombasa trains (Epibolus pulchripes) happily started to feed on the dry needles. The compost bacteria in the millipedes’ droppings converted the needles into the needed humus. These useful animals, collected from coastal bushes, were an instant success as the millipedes multiplied fast in the young forest.
The leaf litter slowly reduced and a layer of humus thickened underneath. The millipedes had found a land of milk and honey having the forest floor for them only but this happy state of affairs did not last long. Soon they became part of the food chain too, as white tailed mongooses and civets started eating millipedes as they came in the forest on their own.
A forest ecosystem was beginning to form, next mushrooms started to appear in the darker moister patches of forest. Then termites, who cultivate fungi, started to build their mounds. Termites generally considered a pest, because they feed on soft timber for construction and furniture, in the quarry’s forest ecosystem they play an important role as they eat almost any dead vegetation, in particular deadwood, bringing it underground and thus making it available to soil microorganisms. The termite’s task is comparable to the one of millipedes but they have an important advantage by mixing the soil substrate too.

Bulldozers dug holes, to make fishponds and water holes. They then encountered a new set of problems when introducing fish into the ponds.
Rene often listens to African folklore and traditional stories; one of which is that if you eradicate hippos, the fish die and the water holes dry up. Hippos graze at night, and return to the water during the day. Whilst in the water they disperse their droppings and urine, thus returning nutrients to the water so that plankton grows. As the hippos walk and play in the water, they churn up the sediments preventing a buildup of toxic gas. This activity also aerates the water, which is all beneficial to the fish. Haller thus decided that hippos were needed for the sanctuary’s new big fishpond.
Fortunately, friends of Rene, Joan and Alan Root had a hand-reared hippo, called Sally, in their home in Naivasha, but she had grown too big and boisterous. The last straw for the Roots was after Sally had destroyed the neighbour’s vegetable garden, she went on to attack their car. So in 1976, Sally was resettled into Bamburi Nature Park. It took a lot of cajoling to get Sally settled, but bribery with a daily bottle of 5 gallons of goat milk helped. You can still see Sally, having her daily feed, at the Haller Park.
A male hippo called Potty was also found, he had been confiscated from a German travelling zoo. He was in a terrible state, he’d had no access to water, so his skin was all dried up and cracked. Potty was in such a sorry state that no zoo wanted him – Bamburi Nature Park with the aid of the Protection of Animals Organisation rescued Potty and gave him a home in Kenya. Sally and Potty instantly became friends; and are now an inseparable couple.
The hippos solved many of the problems with breeding fish at Haller Park and these days you can find the “Bamburi Tilapia” on restaurant’s menus up and down the Coast near Mombasa.

In 1975, Haller Park introduced crocodiles to its ponds, as eggs and hatchlings from Lake Turkana, Lake Baringo and the Tana River. Some of the females have been laying eggs regularly since 1986, which have to be artificially incubated, as the temperature in the quarry is not optimal for crocs to develop. Waste from the fish farm and waste from a trust farm called Baobab Trust feeds the crocodiles.
The Trust carries out community based farmer training in collaboration with Dr Rene and Haller Park. The crocodiles convert this waste into valuable commodities like crocodile skins and meat for human consumption. In fact, you can taste excellent crocodile steak in the Haller Park restaurant.

Around the outskirts of the quarry, Eland and Oryx were brought in to graze during the day. At night, they were placed in night enclosures, and given more fodder if needed.
However, as the excavating machines ate up the browsing areas, it became necessary, in 1987 to move the game herds to areas of the quarry that were already commercially exhausted. A variety of grasses and herbs grew in this area, but at night, they were still placed in a boma, in the old bush area. Slowly these herds have become domesticated, due to the skill of the herdsmen. Now, these trained animals, walk daily over specially designed ‘game crush’ that has a weighbridge, enabling the park to monitor their growth.
Whilst the antelope feed on their favourite plant species, they also disperse seed via their droppings to all parts of the quarry, thus distributing plants from the bush to the grasslands and the forest.

Haller Park is a showcase of conservation, where you can now see wildlife in its natural setting, where once was an exhausted quarry. From wasteland to a microcosm of Kenya’s, age old beauty, where flora and fauna co-exist and make new beginnings possible.
If you are in Mombasa, don’t pass up the chance to see this remarkable feat. Don’t miss going to the restaurant and trying the steaks from their crocodile, ostrich and antelopes. Also, try the Bamburi tilapia. Bon appetite.