The Financial Times: 5 eco initiatives to help the planet 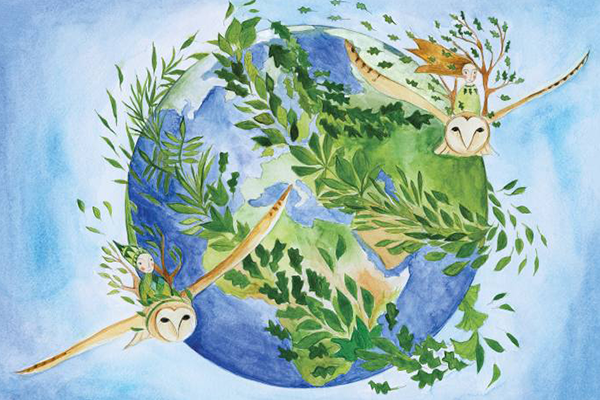 20 Jul The Financial Times: 5 eco initiatives to help the planet

What Happened When We All Stopped

“What is the best way to talk to children about climate change?” is a question that Tom Rivett-Carnac — a former UN strategist and architect of the Paris Agreement on climate change — has been asked throughout his career. During lockdown, he came up with an answer. What Happened When We All Stopped is a children’s book and short animated film, illustrated by Bee Rivett-Carnac, Tom’s sister, and narrated by Jane Goodall, the anthropologist and UN Messenger of Peace. “It helps parents and their children overcome the disconnect between our clever brains and our loving compassionate hearts,” says Goodall. “We must find a way of living in harmony with nature so that both may thrive. I hope this story book inspires people of all ages to play their part in healing the harm we have inflicted, so that together we can create a new future.” Free to download and watch at whathappenedwhenweallstopped.com

It’s #plasticfreejuly. It’s also been 10 years since Plastiki — David de Rothschild’s 60ft catamaran made from 12,500 plastic bottles and other recycled plastic waste — landed in Sydney Harbour after a four-month Pacific Ocean voyage. Climate activist Tia Grazette was one of the project’s founders and, in celebration of the anniversary, has curated the digital exhibition Let’s Live With Less Plastic to bring renewed energy to the anti-plastic cause. Themed artworks — such as Love in the time of rona, by Todd Francis, an illustration showing a couple on a litter-strewn beach — will be shown on 36 digital billboards in London, Birmingham, Manchester, Glasgow, Edinburgh and Newcastle until the end of July. Original artworks and prints (£70-£900) are available to buy from Grazette’s climate-change awareness collective, Le Good Society. legoodsociety.com

In February, storms ravaged the woodland surrounding Zurich. The event prompted local photographer Peter Hauser — who was already working on a project about the consequences of climate change — to document the wreckage. His stark yet beautiful black-and-white images (SFr2,800-27,000; around £2,375-£23,000), shot with a vintage medium-format camera, form the series Time of Tempest, being sold through London-based design studio and exhibition space Maresca Interiors and on the Electric Art Collective e-store. Five per cent of net sales (after production costs) will go to the ETH Zurich Institute of Terrestrial Ecosystems, which conducts research on how to best look after the world’s forests. electricartcollective.com. marescainteriors.com

Tohum for the Haller Foundation

The latest designs by jewellery brand Tohum — which means “seed” in Turkish — are gold-plated necklaces adorned with jewel-toned Murano glass hearts. They were created to “remind us of self-love, love for one another and love for nature”, and 10 per cent of net profits will go to the Haller Foundation, a charity enabling communities in Kenya to establish an infrastructure of sustainable and organic farming, create their own clean energy and practice environmental conservation. tohumdesign.com

Tacita Dean, Alec Soth, Paul Mpagi Sepuya and Wolfgang Tillmans are among more than 40 artists who have donated work to Unity – a new nonprofit organisation created in partnership with the Rainforest Foundation. The charity’s mission is to protect the Amazon, and for its first fundraising initiative artists were asked to contribute a work that reflected their own relationship with nature and forests. The resulting artworks are available as posters (£50) or prints (£150), and all proceeds will help the Rainforest Foundation tackle deforestation. unityforest.land