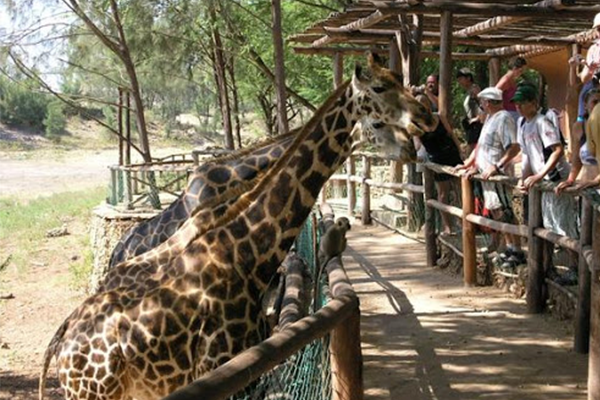 Kenya: For a long time, Nairobi’s skyline has been dominated by a few mega buildings that boast masterpiece architectural designs. They include names like Times Tower, Kenyatta International Convention Centre and Cooperative House.

But even long after the city’s tallest buildings rose to towering heights, more kept coming up. Nairobi and other major towns in Kenya have literally transformed into concrete jungles.But while on one hand Kenya prided itself on growth in the building industry, down South in Bamburi, Mombasa, the mined area lay in ruins — the result of the insatiable hunger for cement. Indigenous plants were felled. And because of lack of vegetation, animals too scampered – or perhaps never survived. The aftermath of coral mining used in manufacturing cement greatly worried those who valued the environment.“About 18 metres of depth was mined: this has been our standard since the advent of Bamburi,” says Albert Musando, the Ecosystems and Tourism Manager of Lafarge Ecosystems, a subsidiary of Bamburi Cement Limited.

The aftermath of mining was awful. As we walk through the acreage of land currently under mining, images of how it may have looked back in the day grew clearer in the mind. And it is from this state of despair that a success story is being written: the rehabilitation of mined land back to a natural ecosystem.

Situated ten kilometres north of Mombasa, on the Mombasa-Malindi road, and parallel to the coastline, Haller Park is the epitome of regenerative beauty. The land once lay fallow, with nothing but remnants of the mining process. But the story has since changed for the better.

“When the project began, the aim was to plant indigenous species; to re-colonise the space with flora and fauna that were part of this habitat before mining…,” says Musando.

The brains behind the reclamation process, Rene Haller, whom the park was named after, had dreams to establish a multitude of plants, maintaining the rule of nature as it were.

The year was 1970. Bamburi had been in business for 17 years. The quarry floor was barren and hard as rock. Coastal temperatures could hit highs of 40°C and the groundwater was saturated with salt concentrations. “Haller had dreams but the odds were against him,” says Musando. “The conditions were harsh for re-establishment of plants. He therefore began with trial-and-error, first planting 26 species of trees.”

Haller would quickly realise the challenges of rehabilitation: only three species – Casuarina equisetifolia, Conocarpus lancifolius, and Coconut palm – survived. Even so, only Casuarina appeared hardy enough to withstand the volatile environments.

Musando explains that although Casuarina trees would grow, their leaves lay on the forest floor with nothing to decompose them, and hence no proper soil or humus formed for life to continually propagate. Through a series of trial-and-error experiments, Haller discovered that his next friend would be the African “red legged” millipedes that seemed to have an appetite for Casuarina.

It was an ingenious way of achieving better soil conditions. Casuarina’s needle leaves were turned into humus by the millipedes and the first layer of soil was formed.

That marked the first major breakthrough in reclaiming the mined land. For three decades, the process of humus creation has continued with astounding results.

Haller and his team then faced the challenge of planting trees throughout the landscape, ensuring that at every juncture no mishaps were experienced.

Fauna was introduced into the land. Insects and other animals proved important for a new ecosystem through pollination and seed dispersion. The experiment worked for the first two square kilometres. Re-planting of native species of trees began in 1989 and was fast-tracked in the nineties.

“By the year 2000, many indigenous plant species had been established. Thirty species of mammals and 180 species of birds resided in the reclaimed quarry. Majority of the animals brought here were either orphans or rescued animals,” says Musando. The story of Haller Park is one of hope where it was flailing. While the park today is an essential hallmark in Kenya’s tourism market, the initial call for ‘reclamation’ was actually a project for food production.

According to Sabin Baer, the chief operating officer of Lafarge Ecosystems, Haller, a Swiss agronomist, joined the Garden department of Bamburi cement to beautify the surroundings and to produce food for the employees of the company.

As mining continued, Baer says, it became apparent that reclaiming the quarries would be important if the business would be sustainable.

Musando too believes that economy and environmental conservation ought to be in balance. “Any business that destroys the environment is not sustainable. The environment is where we all live. It gives us food and virtually all the resources we need for survival,” he says.

Baer says that in the 70s, “there was no environmental legislation in place, and awareness of environmental issues was still in early stages”.

Today, with the passing of Environmental Management and Coordination Act of 1999, it is a legal requirement for mining companies to rehabilitate used up quarries restoring them to usable state.

So far, Bamburi Cement has mined quarries located in Bamburi, Vipingo and Kikambala. With the reserve land left thus far, Bamburi has the capacity of sustaining its mining business for at least 60 more years.

Vegetation comprises mangrove palms, coconut trees, pine, eucalyptus, shrubs and grass. Animals like vervet monkeys, giraffes, weaver birds, kingfishers, storks, herons, owls, eagles and sandpipers have been introduced, among a confluence of other species. “After the environment had been destroyed, there was a need to take responsibility and bring back the native ecosystems,” says Musando. It has taken four decades to do the job but there is no doubt that the doers of the job were dedicated to the course.

Walking through the park, the dance of a butterfly, chirping of birds, graceful walk of the giraffe and the steady balance of life between plants and animals, is a beauty to behold.

Mombasa is Kenya’s leisure capital in many respects. Newlyweds visit the coast for their honeymoons and tourists flock to beach resorts on the shores of the Indian ocean for beautiful days in the tropics. Haller Park is the icing on the cake.