New Vision: A wonderland in the heart of Mombasa 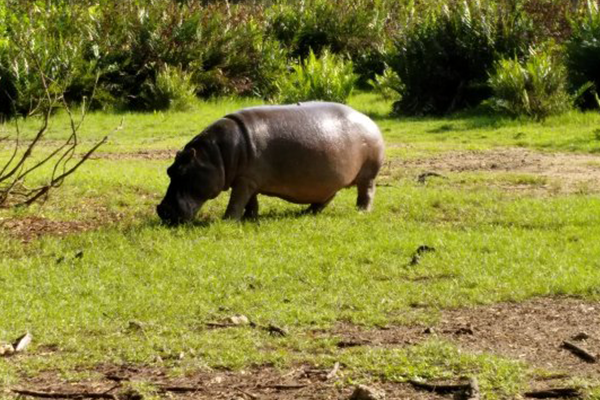 11 Dec New Vision: A wonderland in the heart of Mombasa

As our bus comes to a halt in the parking lot, a 120-year-old tortoise comes forward to welcome us as we disembark one after the other.

The ladies run away, afraid of being received by the older-than-usual elderly creature. After all the drama has cooled down, as though in dispute, the tortoise limps away without saying a word and joins another a visiting family.

There, he seems more comfortable and interactive. He even offers to carry the Indian siblings on his back.

Well, Mzee is no human being but one of the Aldabra giant tortoises that live in Haller Park, a former quarry site which has over the last 37 years been turned into a world renowned nature reserve.

According to Karima Nyinge, a tour guide, there are three notable giant tortoises that browse the park, occasionally bumping into visitors.

The tortoises at Haller Park are not aboriginal to Mombasa. They were rescued from Aldabra, an island located in the Indian Ocean along the way to Seychelles.

History of the park

The 750 acre park is owned by Bamburi cement limited, a leading cement manufacturer in East Africa.

When the company started making cement in 1954, Haller Park is exactly where excavation for raw materials started, mainly for the coral limestone.

By 1971, excavators had gone as deep as cutting the water bed which created ponds of stagnant water. This raised concerns about the safety of the mine workers and the surrounding environment, let alone the fact that the company’s reputation was at stake.

The quarry activities were carried out on open land along the highway to Malindi and in full view of the passing public. It is said that one wouldn’t avoid gasping at what they saw then. Dr. Rene Haller, a Swedish agronomist, who was employed by the company as an environmentalist, later took the initiative to rehabilitate the quarry. He had a passion for wildlife. As an open quarry and because the conditions could not allow all trees to grow, Dr. Haller initially experimented a total of 26 species of trees. The idea was for nature to select the species that suited it best. Among the 26 varieties, Casuarina equisetifolia or pine emerged the prominent choice because it is a fast growing species, capable of growing up to 3-4metres in a year. It is renowned for building up biomass and humus, capture humidity and create a micro-environment for other secondary species to grow. Today as a forest, Haller Park, named after Dr. Haller for his luminous novelty, has as many as 400 different tree species and is home to many living creatures.

An audit conducted in March this year revealed the presence of 230 different types of birds including six resident Crested Cranes.

Nyinge says although the company has a liberal policy on the tree species in the park, they accommodate only troubled or needy animals.

Our focus is on stray, orphaned, injured and sick animals. We also have those we bring to complete a lifecycle in a more scientific ecological system, Nyinge says.

He adds that when the number of animals rises, the excess are relocated in collaboration with the Kenya Wildlife Services or other organisations engaged in wildlife sanctuary.

This is to make sure that the animals in the park are manageable in terms of feeding, carrying capacity and healthcare.

The nature trail takes a minimum of two hours and it is an exciting one for both children and adults. It involves an opportunity to feed the giraffes, or even catch a glimpse of the raucous crocodiles, hippos and buffaloes from as close as 20metres.

The giraffe family of six is probably the most honored in the park. They are fed on yummy pellets by the usual caretaker or visitors.

After seven years of conditioning, they have learnt to be in time for lunch which falls around 11:00am. The giraffes emerge from the forest in a group and tower towards the feeding spot.

The only thing they are never given is water because, according to Nyinge, it is abundantly available in the park.

At 4:00pm, those who visit Haller Park always get the chance to see buffalos, eland antelopes and a perturbing hippo couple that has not had a baby since 1986.

Sally, the female hippo is now 36 years old weighing about two and half tons while the male, Potty, is much bigger weighing about 3tons at 34. Nyinge partly attributes the impasse on Potty’s background.

He was brought over from a circus in Germany. He got sick and a small zoo in Frankfurt offered to take him but he couldn’t improve. He was then seconded for Haller Park which had already been recognised for its conservation efforts, Nyinge notes.

Potty was then transported to Nairobi and transferred to the park in 1986. Sally had already lived in the park for sometime and therefore they initially struggled for supremacy.

Unfortunately, Nyinge says it is already too late for them to have an offspring.

As you get lost in the jungle where only sounds of birds are heard, a notice crocodiles hits you straight in the face. There are close to 100 crocodiles of different types in the park but that’s no point to worry about because they are carefully enclosed away from attacking visitors.

As you make your way out, you can’t miss seeing the Ruston Bucyrus excavator, one of the first that the company used in 1954.

Haller Park has received national and international accolades for environmental responsibility. The park receives over 150,000 visitors per year and the number keeps growing.